Despite a tremendous boost in popularity, few DeFi tokens have given investors more than a 400% return in the past year. Most cryptos that have done so have become extremely bloated, awaiting corrections and/or massive dips.

However, as witnessed by its low market cap-to-total value locked ratio of 0.07, one token has remained undervalued. In terms of the total value locked, no other DeFi protocol has a bigger market share than Curve Finance protocol ($15.76 billion). Let’s go into the details.

What Is Curve Finance?

Launched in 2020, Curve Finance is a protocol that has three main goals:

Yields and their value characterize the world of decentralized finance because of the high spread between the buying and asking price of two illiquid tokens. These spreads go north of 12% at times, causing users to repeat market-making processes in these pools.

Curve is able to bypass volatility by trading stablecoins. The good news is that the value of the investment increases as more people venture into the crypto world. Curve has a fixed trading fee of 0.04% per trade. 50% of these fees are shared among stakers of CRV.

The Curve protocol is a fully decentralized platform controlled by Curve users, and hence governed by a decentralized autonomous organization (DAO). The CRV token is the “engine” behind the Curve protocol. As a governance token, CRV is crucial when it comes to making changes to the protocol, voting on improvements and earning profit via yield farming.

The liquidity pool functions with the provider designating DAI, USDT or USDC to a particular Curve pool and earning interest/gaining fees from the pool. There are numerous incentives to being a yield farmer on the pool, and farmers enjoy the passive income and ownership the Curve protocol offers.

A minimum amount of CRV tokens needs to be locked before an owner can vote to effect changes or suggest changes to the pool. Most of these votes revolve around changing trading fees, spending trading fees, and setting yield farming rewards.

Unlike some protocols, voting power with the CRV token depends on how long your tokens have been locked. Typically, newly locked tokens hold less voting power than older ones.

There are only two ways to get more CRV tokens. You can earn them passively, via liquidity pools, or acquire them from CRV-supported exchanges like Bybit.

How Does the Curve Protocol Work?

Even if their value were to swing to $0.99 or $1.01, the price of stablecoins — true to their names — will eventually return to the $1 mark. With this in mind, Curve replaces the constant product market maker with the stablecoin market maker, which is tailor-made for stablecoins.

The annualized returns on Curve increase as the volume of Curve transactions increases, and traders can go the extra mile by providing loan tokens on Compound. They’ll earn money from transaction fees, and from interest on loans.

Key Features of the Curve Protocol

Curve Finance’s bonding curve is different from that of Uniswap. It focuses on stablecoins, limiting the range of tokens investors can buy and offering a thick layer of security against impermanent loss. What Curve Finance’s bonding curve lacks in numbers, it makes up for in strength: multiple token pairs can be traded without effecting a noticeable change in token price. This isn’t possible with the liquidity pools of other protocols.

Stablecoins can be lent via two pools: Compound and Yearn.finance. Tokens lent on the Compound pool are identified as “cTokens,” while those in the Yearn.finance pool are known as “yEarn tokens.” Of the two, yEarn tokens are the higher risk/higher reward option because they’re linked to many DeFi protocols. 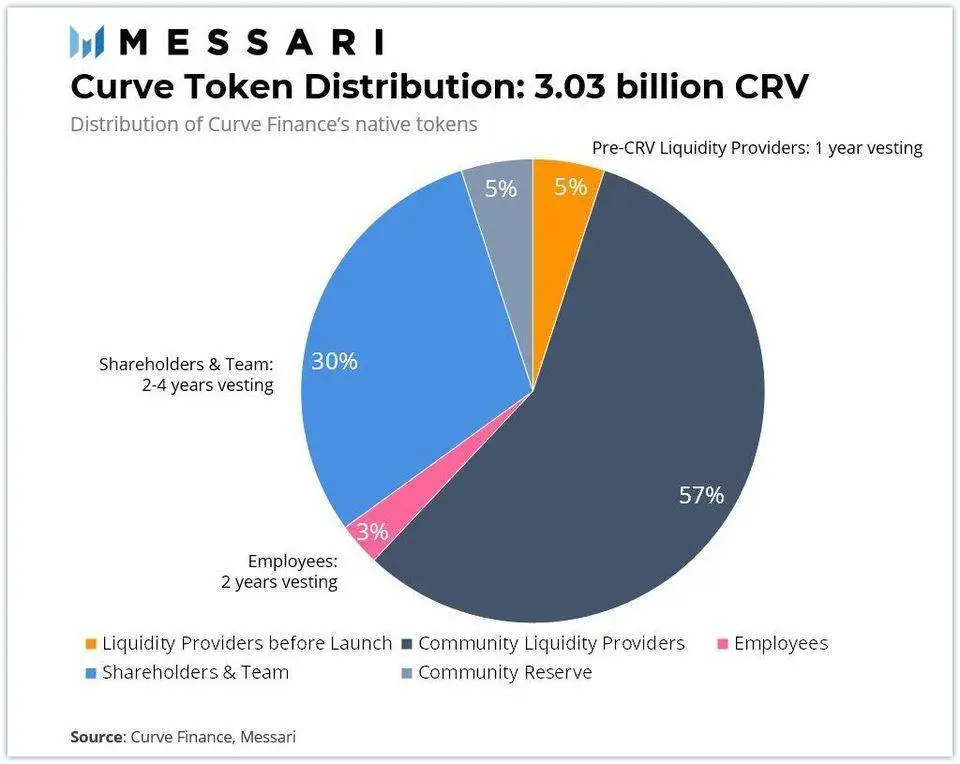 So far, about three billion CRV tokens have been issued, with 62% going to liquidity providers. Approximately a billion tokens are distributed among shareholders and can only be unlocked within two to four years. 3% goes to Curve Finance’s developers and team members, and is also withdrawable after two to four years. The remaining 5% serves as the community reserve.

Pros and Cons of Curve Finance

The Curve Finance protocol has recorded linear movements in the market. It increased with the bull market of 2021, gaining more than 420% in that run. The market correction also took its toll on the token in May, confirming a direct market-token relationship. Before you buy CRV crypto, here are three things you need to know:

﻿Overall, Curve Finance has positioned itself well in the DeFi space, and is poised to grow bigger with time. As of this writing, its total value locked is unmatched, and its low slippage and low chance of impermanent loss make it attractive to investors. While we have a favorable outlook on Curve Finance, like every other investment, please do thorough research before making your purchase. crypto portfolio

Curve (CRV) tokens can be bought on most popular crypto exchanges in the market. On the Bybit exchange, you can buy Curve with DAI, USDC and USDT stablecoins. You can also trade the CRV/USDT pair using industry-grade TradingView charts, like the one below.

The DeFi space is known for its innovative nature and for features not seen in traditional finance. Although stablecoins are commonly used as a springboard for measuring growth, it’s exciting for once to see them being used as assets. As a decentralized exchange, Curve Finance might not attract as much hype as some Layer 1 blockchain protocols, but it’s definitely poised for another bull run. Competition from Uniswap is likely to reflect on CRV’s price. Since Curve Finance has carved out a niche for itself, however, it should be able to weather any storm that may come.