Some people see Bitcoin and other cryptocurrencies as long-term assets to buy and hold with the expectation of appreciation over time. Others take a more active approach, and regularly buy and sell cryptos by studying the charts, reading the markets, and identifying telltale signs of reversals in price momentum and profit opportunities.

Known as chart patterns, these signs appear on Bitcoin and other crypto candlestick charts as a result of price action, technical indicators, or a combination of each. The most prominent chart pattern of all is the “death cross.” Here’s the rundown on this powerful pattern, and the Bitcoin death cross strategies you can use to bring life to your crypto portfolio.

What Is the Bitcoin Death Cross?

Bitcoin’s 50-day moving average is nearing its 200-day moving average and is now at its closest point since 2015. A crossing of the two lines would signal fresh weakness and a move technical traders have dubbed the crypto “death cross.” If you’re wondering about a crypto crash, along with many other current traders and investors, a Bitcoin death cross may provide the answer.

The Bitcoin death cross (or crypto death cross) is a widely recognized chart pattern comprising two separate lines known as moving averages (MAs). Each MA line is plotted according to Bitcoin’s average price over a specific period of time. Using these points, a smoothed line is formed.For example, for a four-hour moving average, each 4-hour subset is averaged. A line is then drawn connecting each 4-hour data point. If the trading activity of Bitcoin or another cryptocurrency suddenly turns bullish or bearish as more and more traders begin buying or selling the asset, the MA line will rise or fall accordingly.

The Bitcoin death cross pattern is formed using the 50-day and 200-day MAs, and with these longer time frames the MA lines are affected less by short-term price movements, and more by long-term sentiment. In other words, they tell you what the general tone of the Bitcoin market is. Of course, these MAs and the death cross pattern can be used for other cryptos as well.

The 200-day MA is plotted according to a much longer time frame than the 50-day MA. This means the 200-day MA tracks short-term prices less closely than the 50-day MA. So when the 50-day line crosses below it to the downside, it indicates short-term momentum is declining against the last 200 days. In many cases, this translates into a reversal of the long-term price trend. The crossing and growing divergence of these two MA lines is known as the Bitcoin or crypto death cross.

While this chart pattern can signal trouble for long-term Bitcoin (and other) crypto investors, others often see it as an opportunity to profit from the shift in momentum — or to bring out their “inner Warren Buffett” by buying low and acquiring the asset at a discount. As he once famously said, “When there’s blood in the streets – buy.”

How to Spot Death Crosses

You already know that a death cross occurs when the 50-day MA crosses below the 200-day MA. However, death crosses form in three stages, and understanding these stages will help you not only spot a Bitcoin death cross when it occurs, but prepare for it by anticipating it — and ride it out until momentum shifts back into buy territory.

The three main stages of a crypto death cross include:

Stage One – The Lead-up

Price action always consolidates after an upswing. Sometimes, it breaks out and continues trending upward. However, in other scenarios, the price turns sharply lower and breaks from the uptrend. This consolidation period provides the very first clue to a possible Bitcoin death cross and upward trend reversal. During this stage, the 50-day MA is almost always still above the 200-day MA.

At this crucial stage, the 50 MA crosses underneath the 200 MA, creating the Bitcoin death cross and a bearish backdrop for the crypto market. Some interpret the death cross as a precursor to an eventual buying opportunity; some see a selling opportunity, and still others wonder if crypto will crash, choosing to remain on the sidelines.

At this final stage of the crypto death cross, price action continues to advance lower as the two moving averages diverge, often resulting in a new downtrend. In a strong downtrend, the 50 MA will act as dynamic resistance and the price action will remain below the 50-day MA for several periods. 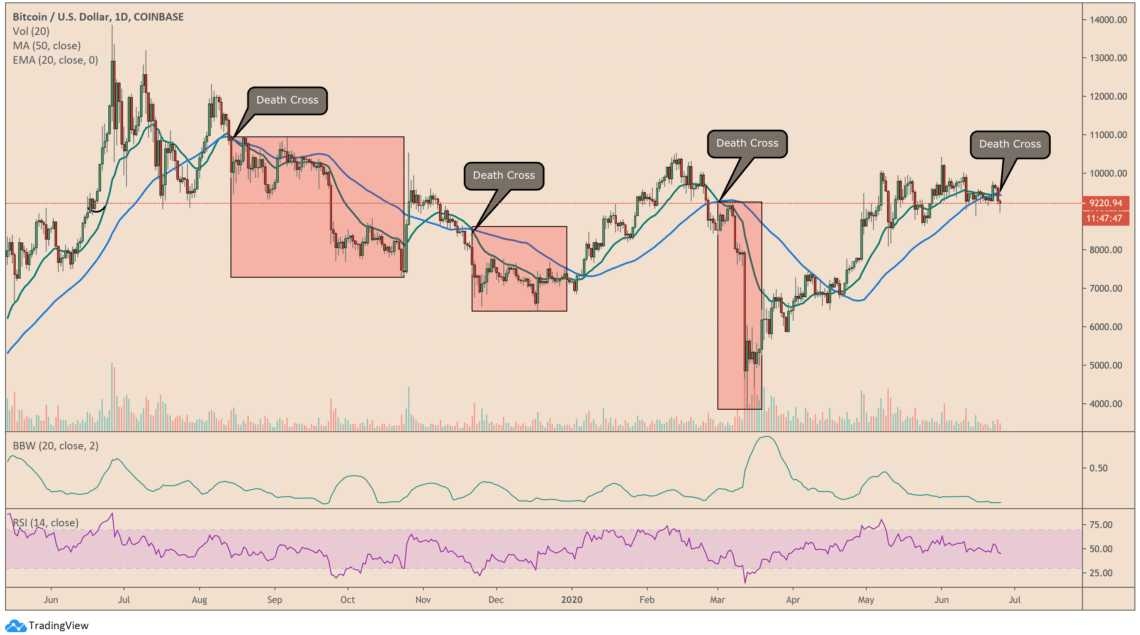 Cryptocurrency may be relatively new, but studying charts and looking for patterns in up and down price movements is a trading strategy older than Wall Street itself. That said, the idea of relying solely on charts and price patterns is not without controversy. While advocates of technical analysis swear by price patterns and the information they contain, others dismiss the practice and consider it more akin to astrology or tarot cards than investing.

As is the case with so many things in life, each side has its merits. The Bitcoin death cross is one of the most powerful chart patterns, but it does have its limitations. Nonetheless, it’s used by seasoned analysts around the world, and widely considered a key signal for the current and future momentum of Bitcoin and other cryptocurrencies. Let’s look closer at the almighty crypto death cross and the arguments made by both sides.

• Very easy to spot and use

The death cross owes much of its popularity to the pattern’s proven track record of accurately predicting major corrections and downtrends. According to Bitcoin’s chart, the crypto death cross has appeared a few times in Bitcoin’s history, and each time the price has dropped right on cue.

While some death cross patterns end up reflecting larger downturns than others, they all result in significant median losses the following month. Imagine having sold when a death cross formed prior to “Black Tuesday” in 1929 — or even when the last Bitcoin death cross formed in 2020. As a result, you would have been spared from some serious volatility and losses.

In addition to their soothsayer-like abilities, crypto death crosses are also fairly easy to understand, identify and use. Even those who are new to charts and technical analysis can add the pattern to their trading toolbox.

• No stranger to false signals

• Must use alongside other indicators

The death cross is also what technical traders refer to as a “lagging indicator.” This means it lags behind the price action, often showing what has already occurred.

By the time a death cross takes shape on your charts, the bearish momentum might already be a thing of the past. This could give you a false sell signal, which is why other technical indicators should also be used in conjunction to confirm any crypto death cross, should one appear.

For long-term HODL Bitcoin investors, there’s nothing worse than looking at a chart and seeing the dreaded “death cross.” Meanwhile, its enlightened twin, the “golden cross,” can make even the most hesitant investor antsy with anticipation. 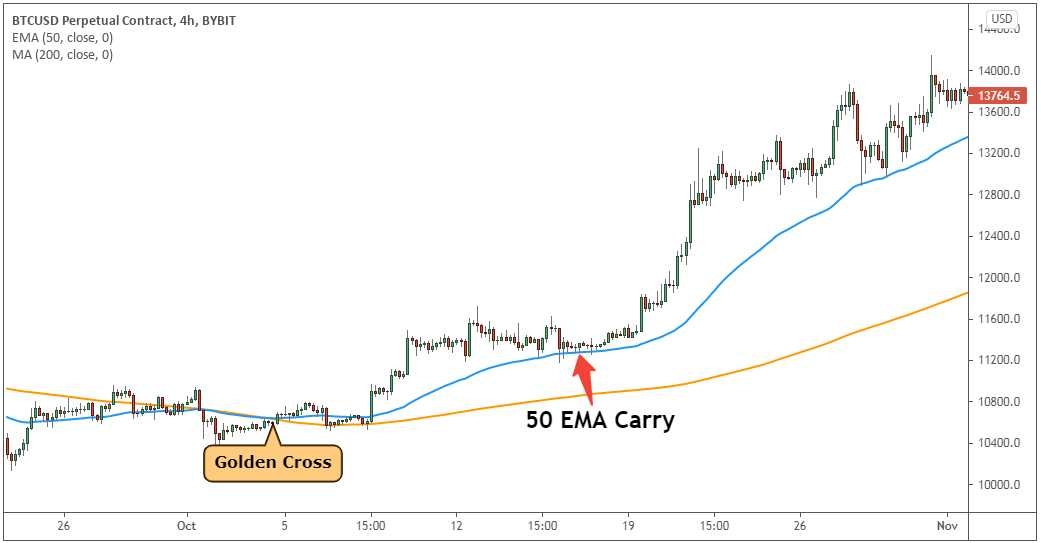 A Bitcoin death cross implies a long-term bear market has arrived, while a golden cross signifies the emergence of a long-term bull market. So, both popular chart patterns indicate a strong confirmation of an extended trend — just in different directions.

Crypto death crosses have proven themselves as reliable trading signals for long-term investing strategies. However, if you like trading crypto more actively, they also represent reliable selling opportunities.

Nonetheless, not all death crosses are created equal. With stronger ones, the 50 MA can break sharply below the 200 MA and just keep on going for days, weeks and even months on end. With weaker ones, the price can continue tracking downward slowly for a short period of time before reversing back into a golden cross.

The key is using the right strategy and combination of indicators — not only to help confirm when a downtrend is occurring, but to give insight into the strength of the trend.

Despite its historical accuracy, relying solely on the death cross pattern can end up being a losing strategy. The answer is in combining the strategy with other key indicators. If the signal is confirmed by most or all of the other indicators, then you may have a winner, or rather a loser, on your hands.

Not sure which indicators to use with your Bitcoin death cross strategy? There are certain indicators most experts recommend.

Turn Up the Volume

After identifying the formation or possible formation of a death cross, you should expect a bearish trend change and a sharp turn for the worse. To confirm your suspicion, you need to turn your attention to another key indicator: Trading volume.

If the trading volume for Bitcoin or another crypto is high whenever a death cross forms, you can expect a much more reliable bearish signal. High volume is indicative of a big trend change in the works. After all, crypto trading is largely psychologically motivated.

Pump Up the RSI

Another important tool to use along with the crypto death cross is the relative strength index indicator, or RSI. The RSI works great at measuring investor pessimism, so it can be used to see if investors are indeed dumping their positions.

If the RSI indicates Bitcoin is overbought and there’s a death cross as well, you can almost certainly expect the end of the bull run — and bearish time ahead.

Get Your MACD On

Since the crypto death cross is all about moving averages, you can’t leave out the MACD. The moving average convergence divergence indicator (MACD) is another popular indicator that shows you whether a trend is losing momentum or picking up pace. It also indicates whether a market is bullish or bearish.

The death cross also works well with the Cboe Volatility Index, or the “fear index,” as many traders call it. Unlike the others, this indicator doesn’t show momentum or trends — it shows fear. It shows how afraid investors are.

Any score above 20 classifies as high, but if the score is 30 or more and a death cross is present, the question isn’t, “Will crypto crash?” — but rather, when.

Technical analysis can look a bit like hieroglyphics to the uninitiated, but patterns like the Bitcoin death cross aren’t very hard to grasp or spot when you put a little effort into studying them.

Today, we’ve learned all about the vaunted death cross. You now know when it’s time for a sell-off and to hit the door. However, don’t stop there. Learning more about the golden cross and additional chart patterns can prepare you to profit in any market conditions.